Whenever we’re out in the middle of nowhere land, there’s one thing we always look for at night – stars!  Being in remote places like that, there’s little – if any – light pollution from cities or towns and the night skies are magnificent.  On a clear night you can see the Milky Way as a bright band across the entire sky, at least when you’re not distracted by the millions of other brilliant stars all around!

There’s only a couple of things that can foil this nighttime treat.  Weather – clouds, rain, general “icky” conditions – forget it.  You’re not seeing anything.  The more sneaky villain is the moon if it’s up all night.  Don’t get me wrong – it’s still pretty and you can see many more stars than you typically can in an urban or suburban area on a clear night.  The moon just drowns out the twinkles a little by its sheer brightness in the sky.  For this trip, the weather generally cooperated.  The moon… not so much.

The timing of our trip to Goblin Valley fell in between the extremes of the moon phases – smack on a quarter moon that was coming up around 9 or 10pm each night with clear skies and setting mid-morning.  It muted the skies a tad, but we still marveled at the universe blanketing us each night and I wanted to capture it in a picture somehow.  Just how?

I played with star trail shots a little almost 10 years ago during our trip to Chaco Canyon NP in New Mexico (very, very much in the middle of nowhere!).  I was pleased with the shots I got, though we quickly realized the true challenge of the photography process was staying awake late at night waiting for the long exposures to finish after a long day of hiking in the heat.  Staying awake at Goblin Valley wasn’t going to be as much of a problem, but with the moonrise timing, straight-up star trail shots weren’t going to work.  Just too much light.

That’s when it hit me – why not use the moonlight as my light source and see what the landscape looks like on a long-ish exposure?  The next morning I happened to wake up well before daybreak, so I decided to give it a go right outside of our campsite using a huge bluff of rock right behind us as the focal point.

It took a few shots to dial in how long the exposure should be, but I quickly figured it out.  That’s when I bagged a shot that looked awesome and different on the camera’s display that I almost did cartwheels right then and there!  (Naturally, when I got home & saw the pictures on the big screen, I saw how much camera shake was in the image because of the wind, but I salvaged it – thank you post-processing tools!) 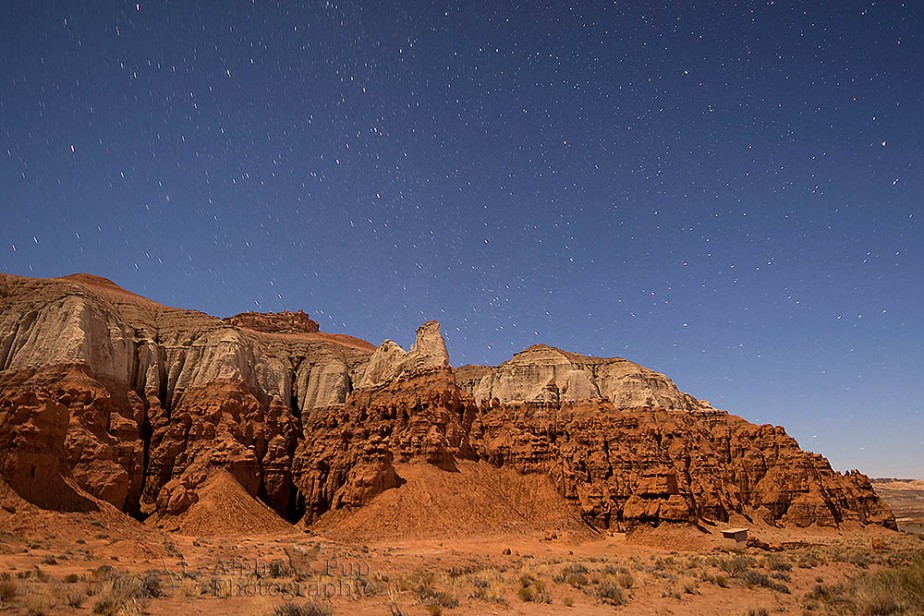 Knowing the sun was closer to rising than I liked, time was short and I got back into it and clicked off a few more shots.  When you’re doing a series of pictures in low light like this in close succession, you really see how quickly lighting conditions change.  The sun rises surprisingly fast and the lighting changes nearly imperceptible to your eye have a huge effect on exposure times. 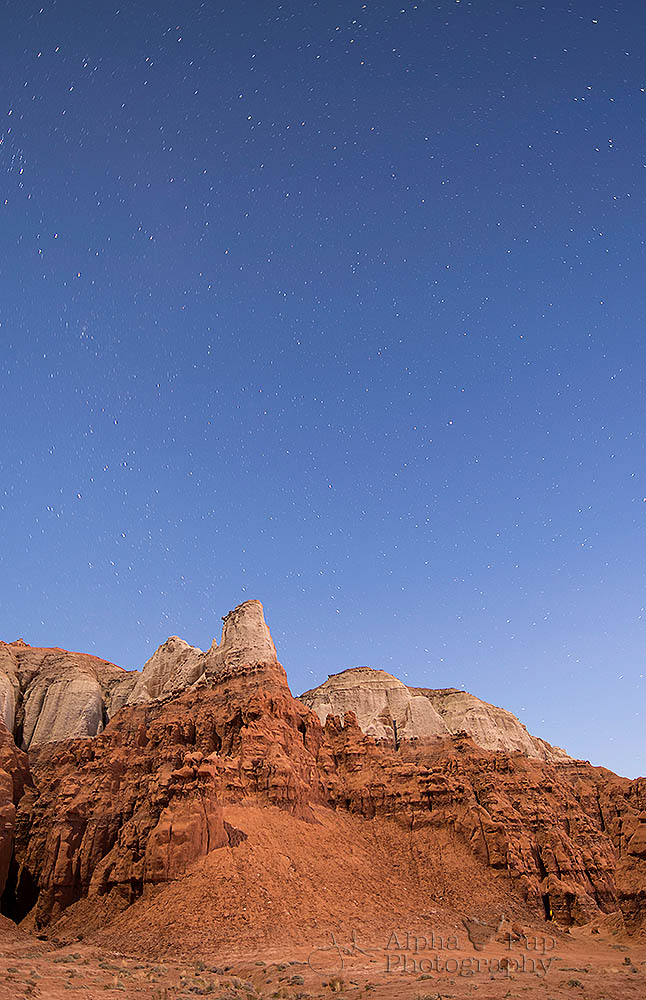 While the shots looked fantastic on my camera in the field (despite the aforementioned shake issue), what I didn’t realize until I got home was I managed to create shots with mini-star trails in them!  Even better was that the horizontal shot above happened to be facing the north, so I got the North Star in the shot meaning the trails – given enough exposure time – create circles.  Woo hoo!

Eventually it got a touch too bright to continue with the long exposure moonlight shots.  But before I put the camera & tripod away, I swung myself around to face east and caught the early morning color on the horizon as day was breaking, complete with Molly’s Castle in silhouette. 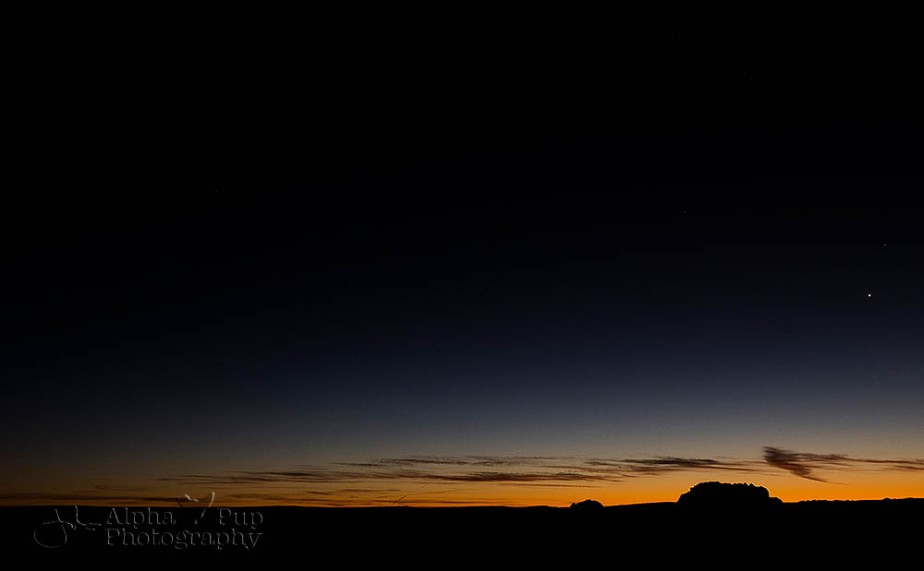 Jazzed about the outcomes of this little experiment, I convinced my husband to get up with me even earlier on our last morning in camp so I could try some of these shots among the goblins.  Being the wonderful husband that he is, he agreed and off we went.  That’s when the moon teamed up with the weather to foil our adventure.

Patchy, thin clouds rolled in over night.  Some stars were still visible and the moonlight was filtered through the thin clouds or peeked out when there was a hole in the shroud above.  Oh, and the wind was back too (though not as bad as the day before, thankfully).  Still, we were up, so may as well give it a go and see what happens.

I wasn’t quite as excited about these shots in the field as I was the day before, but the shots I came home with looked otherworldly!  The winds turned patchy cloud cover into streaks of silky white across the sky and the goblin-filled landscape looked like something you might find on a well-eroded area of the Martian landscape in the middle of the day.  Funky to say the least! 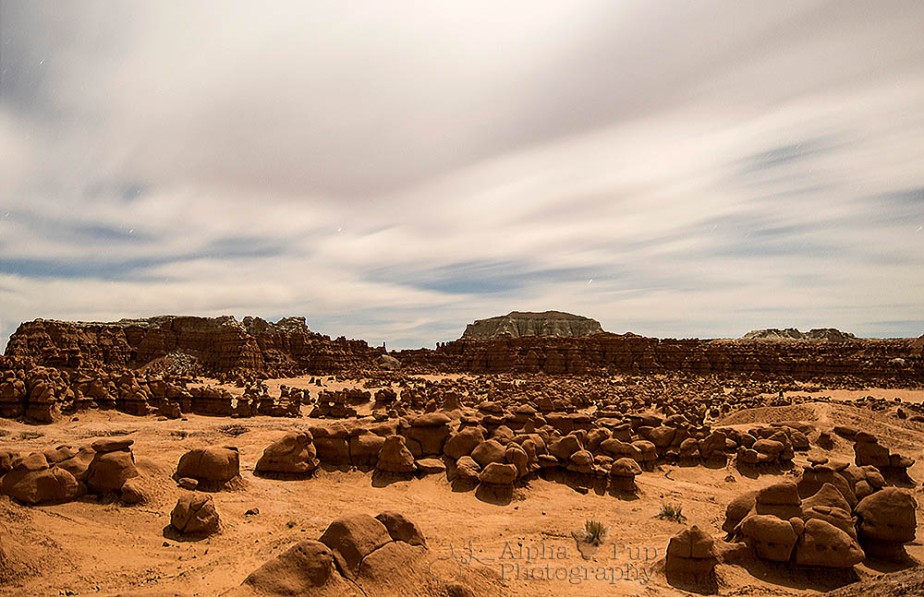 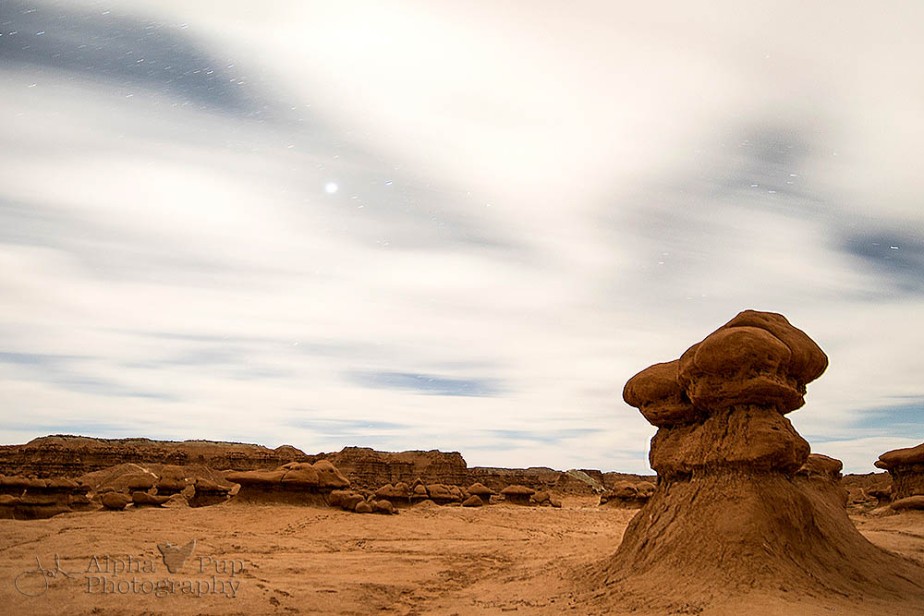 Although attempt #2 at using moonlight as daylight wasn’t as successful as my initial outing, I learned a lot about shooting in conditions like this and I already have ideas for new things to try next time I have the opportunity.  The question is – when will that opportunity arrive?  Maybe at Great Sand Dunes in 2018?  Hmmm…

Let Us Know What You Think... Cancel reply