One of the big things that happened to us over the summer was my husband taking a new job where he gets to build parks and trails and preserve open space (lucky!).  With his vacation allotment about to reset to zero, we took advantage of his little bit of time off between jobs to scoot out of town for a long weekend. Getting away was especially important because other than our long-planned trip to Great Sand Dunes NP, we weren’t sure when we’d be able to get away again.

Since this trip was a last-minute thought, our options for where to go were a little limited because every mountain town’s hotels were fully booked or just insanely expensive.  Eventually, we zeroed in on heading to Grand Junction about a 5 hour drive away from our home so we could see some decidedly different scenery.

We’d only been to Grand Junction once before about 5 or 6 years ago as part of one of our big vacations.  We didn’t spend much time in the town then because we were camping at nearby Colorado National Monument, but we’d heard good things about the town since that trip.  We’re always up for going to new places, so why not check it out?

As departure day got closer, the weekend weather forecast kept getting hotter and hotter.  We were in the middle of a big heat wave in the Denver area, but that was nothing compared to Grand Junction.  Grand Junction is normally hot because it’s lower and flatter and closer to the deserts of Utah, but it’s not usually 105+ degrees every day of a weekend.  (Yowza!)  Knowing the heat would be brutal, we packed up, sucked it up, and got the hell out of town.

Grand Junction itself was pretty cool.  The downtown area was cute with some good shops and a few restaurants.  Just a good general place to hang.  There’s plenty of outdoorsy things to do outside of the city limits, and one of the most well-known attractions is Colorado National Monument.  Even with the ungodly heat, that was where we were going hike at some point in the weekend.  So long as we got an early morning start, it wouldn’t be so bad, right?

Up before dawn and on our way, we picked the Monument Canyon trail that takes you out to the Independence Monument rock formation.  We hiked part of this trail before on our previous trip, but this time we decided to do the same trail again and go a little further out because we had a lot of fun the first time around.

Very quickly we were reminded of how different canyon hiking is from mountain hiking.  With mountain hiking, you start your day climbing uphill and finish it coming downhill with little or no flat spots in between.  Canyon hiking is the exact opposite.  You start at the canyon rim, descend (sometimes rapidly) to the canyon floor, trudge through the flat for a ways, then climb out at the end of your day when you’re dog tired.  In a lot of desert canyons, the floor doesn’t have a lot of trees or shade, so it gets hot – and fast.  By 8am it was already pretty toasty and we were barely an hour into our hike.

Once you reach the canyon floor, it’s fun watching the little details of rock formations, desert plants, and even some critters.  Ecologically it’s so different from the areas we hike in around our home that it’s visually and mentally refreshing in a lot of ways.  We got lucky on this day and even bumped into a nice-sized collared lizard along the trail.  (This guy was colorful and much bigger than the little lizards zipping around all day.) 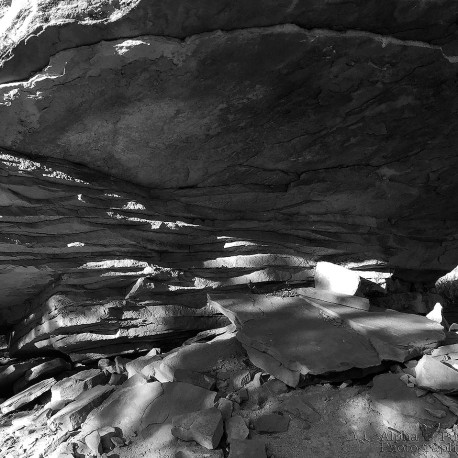 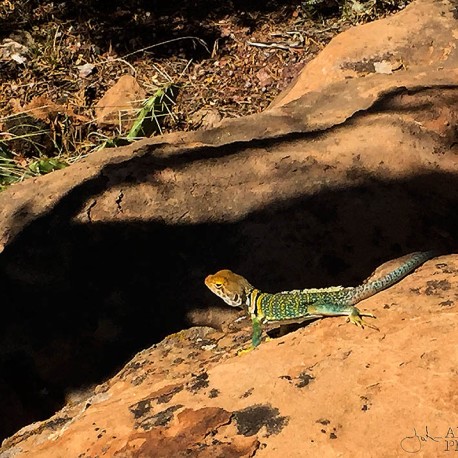 As I took this picture, here’s a snippet of the conversation I had with myself in my head:

Is it seriously that far away?  Can’t be.

Really?  It’s still that far away?  We’ve already gone a few miles, so how is that possible?

…. Dear Lord, I think my boots may melt today if we’re not done by noon. …

But if I do this, that justifies having beer and bad-for-me food when we get back to town!  Hmmm…

… Holy hell – this is getting seriously hot.  Can I manage to keep my yap shut about the heat all day to get to the beer and fried food?  I think I can. …

(It’s truly amazing what you can motivate yourself to do by rationalization or visualization.  For me, both rationalization and visualization usually involve food.  I can’t tell you how many times I’ve mentally pushed myself through a workout I didn’t want to do in the first place by bargaining with myself using pizza & beer on a Friday night as a bargaining chip!  But I digress…)

We did get to Independence Monument and it was really cool.  I think enough of my brain cells had melted by then that I forgot to get a picture of the rock up close.  Oh well!

Once we got back to our car, we spent the weekend operating like most Southerners do during their sticky, humid summers – dashing between air-conditioned cars and buildings as much as possible.  (Lucky for us we just had the heat to deal with – not that icky humidity added onto the heat!)

In the end, we had a good hike and a fun trip in spite of the wickedly hot weather.  We also zeroed in on where we want to hang out the next time we’re out that way, so maybe it’ll be less than 6 years between trips to Grand Junction this time.

Let Us Know What You Think... Cancel reply